What always fascinates me is your reaction to the shots that we share. People see them differently than I do, that’s part of what makes it so fun. Some people see a beautiful person, some people see a great composition, some people simply see a well crafted photo. No matter what, it’s always fun to hear what people think and what they feel when they see a particular shot and it always surprises me to see which shots become popular. I know, I know — if I posted photos of unicorns I wouldn’t be so surprised by their popularity. I am just fresh out of unicorns and they’re kind of ornery when the flash goes off. I think it’s the “no photos of mythical creatures aloud” thing.

So with that in mind I thought we would take a look at the 3 most popular glamour shots from the past. Now, I didn’t just pull a fast one and select my 3 favorites. These photos are picked based upon the number of total views from the past 12 months.

This shot is by far our most popular photograph in our Glamour portfolio. It’s definitely different I’ll give it that much. And it’s a little bit surprising.

In fact this picture wasn’t something that was planned. The model thought it would be cool and she had no doubt that she could fit in that tiny little box. Turns out getting her in wasn’t the problem — getting her out was the real magic. Either way it’s a really great shot and a great conversation starter. 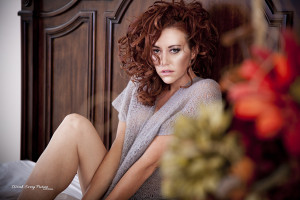 This next shot is not only a fan favorite, it’s one of my favorites. I like the unusual composition combined with the foreground bokeh (that’s the blurry schtuff in the front). It makes for an interesting shot and it helps direct your eye to our beautiful subject. Her wardrobe and the lighting are both simple — allowing her to shine in this shot. But it’s her confidence, among many other things that make her so gorgeous. The big beautiful red curls don’t hurt either. 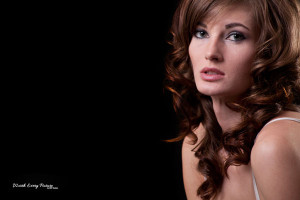 This last shot is more of a traditional glamour head shot. It’s a simple shot on a simple background but is has a beautiful quality to it. The rim light coming from the right of the frame gives her just enough glow to make her stand out from the edge of the photo.

This shot, along with the first one, are not photos I would have ever expected to have such popularity. Like I said that’s a large part of the fun.

Next week we’ll bust out our three most popular boudoir shots. I bet there will be a couple in there that will surprise you as well.

Until next time — Enjoy Life!